Katarzyna Smolarek is a Polish classical guitarist based in Salzburg, Austria. Currently she is a student of a Master’s degree at the Mozarteum University in the class of professor Marco Díaz-Tamayo. In 2015 she performed her debut in The Witold Lutosławski Concert Studio of Polish Radio. Since then, she has been maintaining an active concert schedule and has so far performed in many European countries as well as in Chile and Australia. She made headlines in national newspapers, such as La Stampa (Italy), El Mercurio (Chile) and Jornal das Notícias (Portugal). In the 2018/19 season she was a participant of the Eurostrings programme for talented young guitarists. She has been awarded over 20 prizes at national and international competitions. Since 2019 she has been a Savarez Artist. Her most important prizes include: 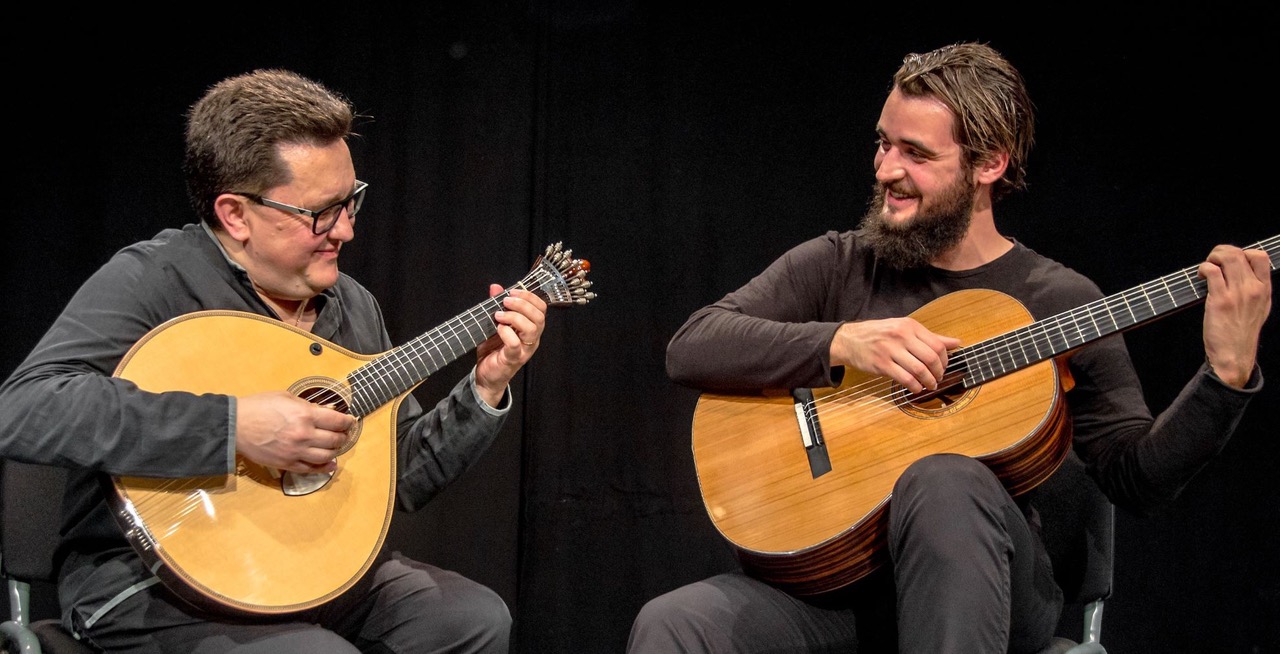 Artur Caldeira has graduated in Classical Guitar and Master in Artistic Interpretation by ESMAE, PPorto, in the class of the teacher José Pina and was certified, after a public performance, as Specialist in Music. He is currently a doctoral student in Artistic Education at the Faculty of Fine Arts of University of Oporto. Award-winning guitarist, he has performed solo, with orchestra and in several collectives in many countries in Europe, Africa and Asia. He has done first absolute auditions of some works. He has founded the group “Som Ibérico“, for which he wrote arrangements for themes of Popular Portuguese Urban Music, recording a CD where he has signed the production and the musical direction. He has produced, directed and recorded the CD “Clarinete em Fado” by António Saiote. He has directed and recorded, with the guitarist Daniel Paredes, the CD “Sefika Plays Fado” by the Turkish flutist Sefika Kutluer. He has recently received the medal from the National Assembly of France. He is a Professor of the CMP since 1992 and he teaches at ESMAE– P.PORTO.

“Artur Caldeira (…) showed it in the concert (of Villa Lobos). The musicality, the technique, the sonority, the phrasing, were mainly with the second movement and the long and virtuosic cadence.” (Público newspaper, 7/7/1998)

“Artur Caldeira is a guitarist with a solid and brilliant formation of classical guitar, which, moreover, was clear in the show he gave to the audience at the ISEC Auditorium. It should be noted that the end of Artur Caldeira’s performance was a moment of ecstasy, when the guitarist interprets, only on the classical guitar, “Verdes Anos” by Carlos Paredes. (Official website “Coimbra 2003, Capital of Culture” – 18/4/2003)

“Artur Caldeira has an impeccable technique that allows him an almost shocking sound clarity in the most popular repertoires, and a very clear expression.” (Público, newspaper, 6/7/2004)

Born in Wil, Switzerland, Daniel Paredes has completed the Secondary Composition Course and the 8th degree of Instrument at the Calouste Gulbenkian Conservatory of Music, in Braga, respectively in the classes of the teachers Paulo Bastos and Rui Gama. He has graduated in Music, String Instrument Variant (Guitar) at ESMAE in the class of Professor Artur Caldeira. He has performed at important festivals with names such as Artur Caldeira, António Saiote, António Augusto Aguiar, Jed Barahal, Jorge Alves, Vitor Vieira, Ana Tedim, Márcio Pinto and Ana Barros and in projects such as Som Ibérico, Crossover Fado and Clarinete in Fado. Within the scope of Fado, he has countless performances with Ricardo Ribeiro, Diamantina Rodrigues, Tânia Oleiro, José Luis Nobre Costa, Joel Pina, Luís Guerreiro, Pedro de Castro and Artur Caldeira, in Portugal, Spain, France, Switzerland, Germany and Turkey. In 2016, he has participated in the Ricardo Ribeiro CD Hoje é assim, Amanhã não sei (Warner records, 2016) as arranger and interpreter of the song Voy, in duo with Artur Caldeira. With this guitarist, he regularly accompanies António Saiote on the Clarinete em Fado program and recently recorded a CD with the Turkish flutist Sefika Kutluer. He took improvement courses with important names such as José Pina, Margarita Escarpa, Celso Machado, Ricardo Moyano, Artur Caldeira, Carlos Bonnel, Goran Krivocapic, Danijel Cerovic, Sylvain Luc and Richard Galliano. Recently a finalist in the Master’s Degree in Artistic Interpretation, at ESMAE, under the guidance of Artur Caldeira. He currently teaches at this prestigious institution. 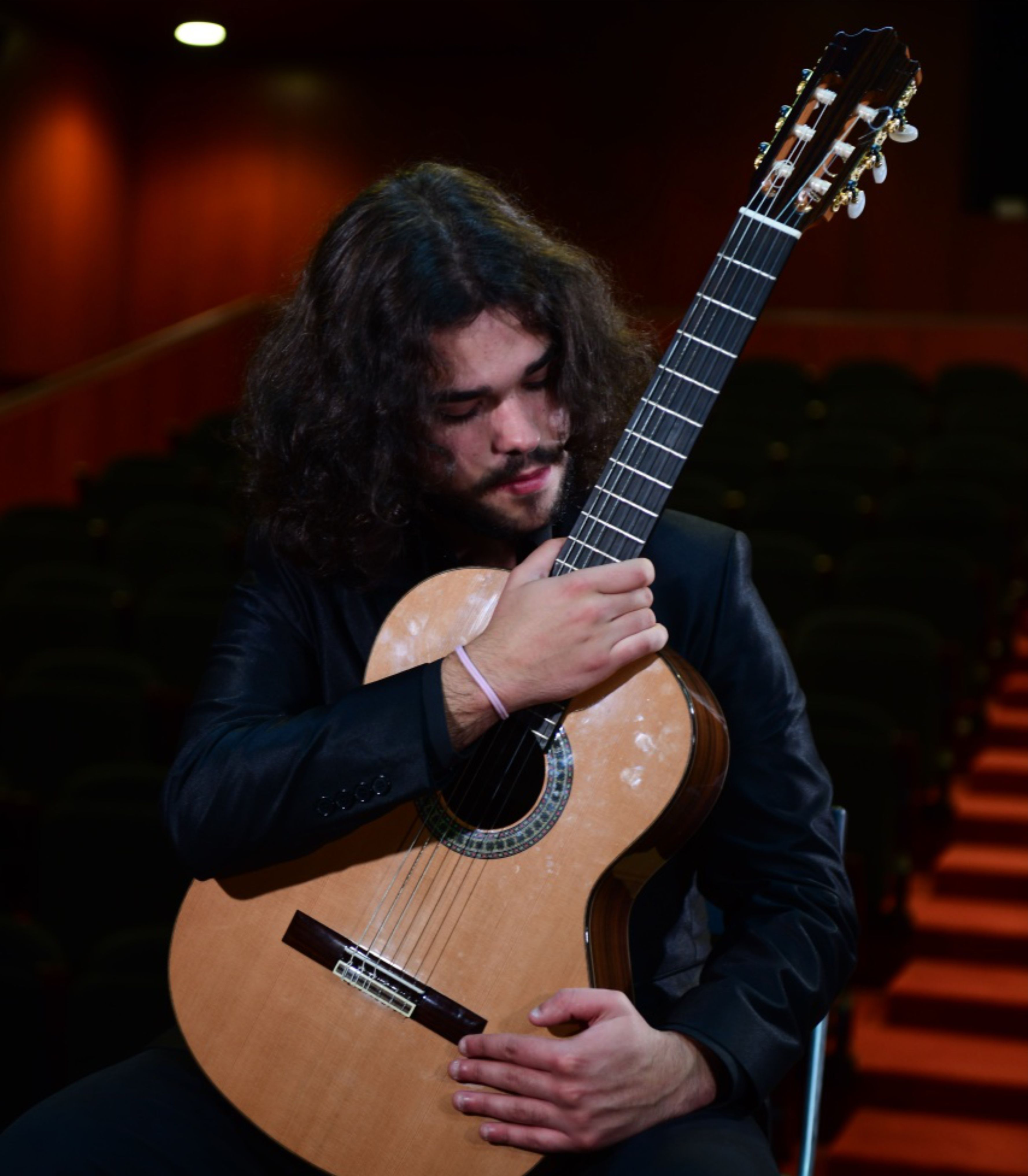 Tiago Silva born in 2003, in the city of Marco de Canaveses, is a young guitarist who is currently attending the final year of the professional music course in the Amarante Cultural Centre, under the orientation of Professor Tito Silva. He has been studying classical guitar for three years and he has also attended the Artâmega Arts Academy in the city of Marco de Canaveses. He is a young guitarist with a lot of potential who represents the Amarante Cultural Centre in numerous activities whether inside or outside.

He has participated in masterclasses with the renowned guitarists Ricardo Barceló, Pedro Rodrigues and Dejan Inanovic. 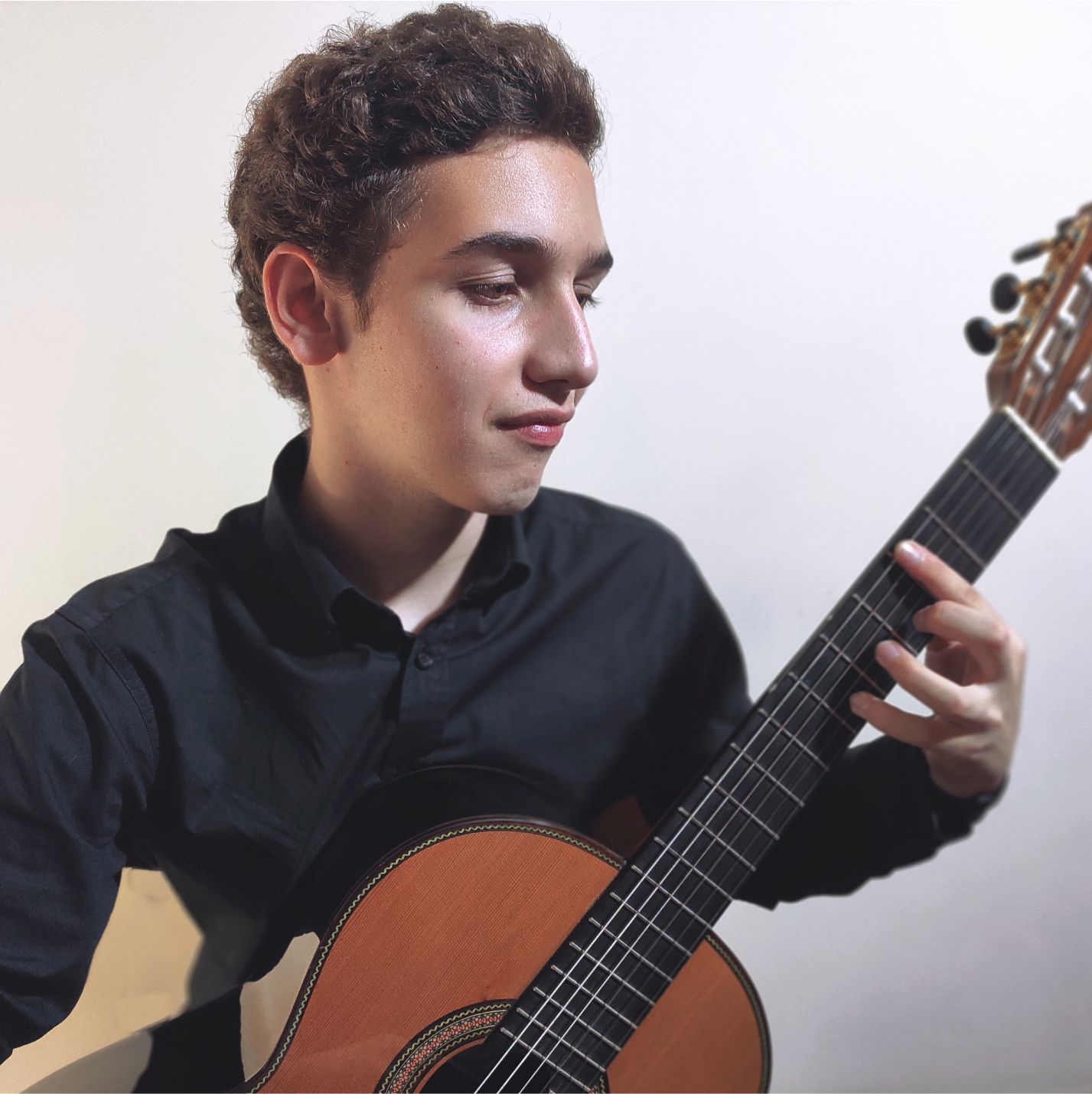 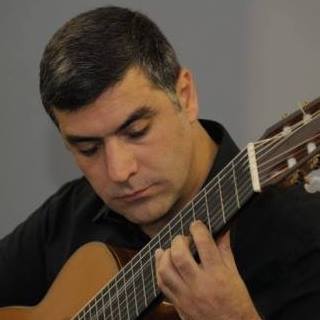 Paulo Ramos has started his music studies in the Óscar da Silva Music School in Matosinhos with the teacher Paulo Peres. He has graduated in the Guitar Complementary Course in the Oporto Music Conservatory in 1996 with the same teacher. He has entered the Music and Performing Arts School of the Oporto Polytechnic Institute in the class of Professor Artur Caldeira, finishing his degree in the class of Professor José Pina. During his academic studies he has participated in performance classes with José Pina, Abel Carlevaro, Aldo Rodriguez, Alberto Ponce, Leo Brouwer and Betho Davezac. He has concluded the teacher in-service training at the Aberta University in 2010 being in the same year awarded with the Title of Specialist in the Area of Music. He performs frequently in public as soloist and as music chamber guitarist. He has also been invited to be a jury in competitions. In 2017 he has been recognised by the Merit and Excellence in Culture being honoured by the president of the parish council Matosinhos-Leça. In 2021 he has received a Vote of Commendation from SPZN and CFP for the recognition of his work in substitution of the face-to-face teaching activity. He is, since 2021, member of the Board of the Music School Óscar da Silva, having been President between 2011 and 2021 and integrated the Pedagogical Direction between 2009 and 2017.

Nowadays he is a teacher at the Oporto Higher School of Education, at the Leça da Palmeira Music School and at the Óscar da Silva Music School, being here the Guitar Ensemble Director. 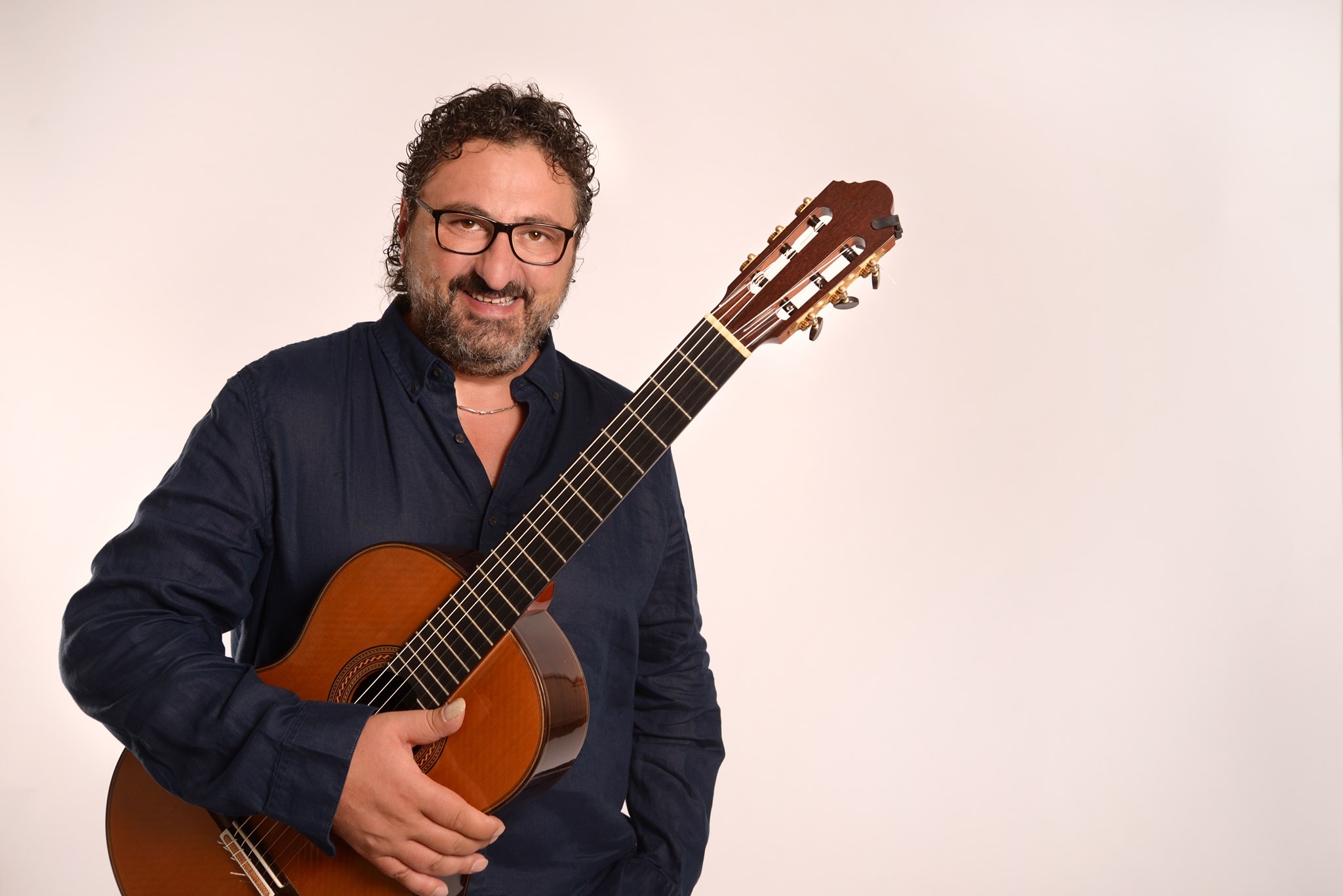 At the age of eight, Aniello Desiderio performed in public for the first time, displaying such outstanding gifts that music critics started to speak of him as an “enfant prodige”, “wunderkind”, “a genius”, “the Orpheus of the guitar”, “a guitarist of the century”, and “il Fenomeno”.  He quickly established himself as a concert artist with a distinct voice when he won 18 first place International Awards in both national and international competitions.  Notable among them are 1st Prize and Special Prize for the best interpretation of South American music at the International Guitar Competition in Havana, Cuba (1988); “Neapolitan of the Year” Award in Italy (1988); 1st Prize and Special Prize of the best interpretation of Tarrega’s music at the International Francisco Tarrega Competition, Benicasim, Spain (1992), and 1st Prize at the International “Guerrero” Competition, Madrid, Spain (1994). He performs regularly as a recitalist in North and South Americas, Europe, Asia, and Africa, in the most important theaters of the world including Carnegie Hall, Tchaikovsky Concert Hall in Moscow, Palau de La Musica, Mozarteum, Munich Philarmonie, Koelner Philarmonie, Alte Opera, Tonhalle, Teatro delle Palme, Radio France, Die Gloke, Istanbul Philharmonic, Berlin Philarmonie, Opera House Wien and Concertgebouw Amsterdam. Frequent soloist with orchestras, his recent appearances include performances  with the Oregon Symphony (USA), Pro Musica Columbus (OH, USA), Bavarian  Chamber Orchestra and Romulo Larrea (Bandoneon) Tango con Passion  (Germany), Zagreb Symphony, Istanbul State Symphony Orchestra (Turkey), RSO  Berliner, Deutche Kammerphilarmonie, Alessandro Scarlatti, I Pomeriggi Musicali,  Bach Collegium, Wiener Kammerorchester, and Kremerata Baltica with Gidon  Kremer, as well as an invitation by legendary violinist and conductor Salvatore  Accardo to the “Settimane di Musica Internazionali” in Naples, Italy, where he  performed with Moscow Virtuosi Chamber Orchestra lead by Vladimir Spivakov.  He received the “Artist in Residence Award 1999” from the German Radio DLF at Musikfest Bremen together with Gidon Kremer. The same year, the German Television BR/TV produced a music documentary and portrait of Mr. Desiderio in Naples which was broadcast throughout Europe.  He was invited to the 70th birthday Gala of Maestro Lorin Maazel by the Bavarian Radio and Television station. The world-famous painter Ernst Fuchs invited him to perform at his Museum-Villa in Wien and in 2010, he performed the “Concerto Madrigal” by Juaquin Rodrigo with the legendary classical guitarist Angel Romero.  An avid chamber music with multiple ongoing projects for decades, his guitar duo project with renowned soloist Zoran Dukic, often dubbed as “From A to Z” Duo in the USA, has been a favorite of numerous European festivals since early 1990s and frequently reinvited to perform at major international venues including Palau de la Musica in Barcelona Spain.

Together with his brothers Gennaro and Gaetano Desiderio, and other famous Neapolitan musicians, he founded the group Passione Napoletana, performing the highly emotional music of his home town Naples: “Serenate, Tanghi, Danze, Canzoni e Tarantelle Napoletane.”

In fall of 2009, he created his latest recording project: “Quartetto Furioso” with  violinist Gennaro Desiderio, pianist Gaetano Desiderio and percussionist Salvatore  Minale playing a program consisting of Vivaldi’s “The Four Seasons” and Piazzolla’s  “Four Seasons of Buenos Aires” and realized the production of a CD of this project  for the famous German label Termidor, which includes singer Sabine Mayer and  Grammy Awards winner Cuban-American alto saxophonist, clarinetist and  composer Paquito D’ Rivera. He was the co-founder together with Jurgen Nimbler of “World Guitar Ensemble” which featured a roster of internationally acclaimed and sought-after classical guitarists including Zoran Dukic, David Tanenbaum, Thomas Muller Pering, Costas Cotsiolis, Gyan Riley, Olaf Van Gonnissen, Laura Young, Peppino D’Agostino, Duo Kaltchev, and Pablo Marquez.  Between 2018 and 2019, he was the Ambassador of Eurostrings (aka European Guitar Festivals collaborative) featuring 20 guitar festivals all around Europe where he played recitals and gave masterclasses to the winners of all 20 competitions. In addition, he gave the european premiere of “The Walls” by Sergio Assad for solo guitar and guitar orchestra. The piece was performed in 2021 by Yo-Yo Ma in a version rearranged by Sergio Assad for Solo Cello and guitars featuring the most famous guitar players in the world including GrammyⓇ awards winner David Russell.  He has recorded for Deutsche Grammophon, Frame, Waku Music, Koch-Universal, Adoro Records, Brilliant Classic, Accelerando Music Production, and since 2018 he is recording for GuitarCoop label. A champion of new music and often referred to as the musician of musicians, he has inspired renowned guitarist John McLaughlin to chose him for the European premier of his Concerto “Thieves and Poets”. Other composers who have written new works for him include Roland Dyens, Stephen Goss, Dale Kavanagh, Carlo Domeniconi, Simone Iannarelli, the late Angelo Gilardino and Georg Schimtz (director of Koblenz Festival and Honorary Professor at Mainz University, Germany).  In high demand as a teacher, he was the concert artist and professor in residence from 2004 to 2012 at the International Guitar Academy in Koblenz (Germany) and from 2012 the guitar professor at university of music at S. Giacomantonio of Cosenza and Gesualdo da Venosa of Potenza in Italy. For two years in a row, he was invited to give master classes at Internationale SommerAkademie Universität Mozarteum (Salzburg, Austria).

His students are today’s brightest and most promising emerging concert artists of the new generation all around the world as well as often winners of the most prestigious guitar competitions in the world. They include Artyom Dervoed, Pavel Shamshura, Carlotta Dalia, Andrea Roberto, Nino D’Amico, Elia Portarena, Eleonora Perretta, Cristina Galietto, and Nicola Montella among many others. Mr. Desiderio graduated with honors from the Conservatory of Music in Alessandria, Italy in 1992. He is currently the professor of guitar at University of Music at Domenico Cimarosa of Avellino (Italy). He is the worldwide Artist Ambassador for D’Addario Strings.